With the price of nitrogen (urea) going up close to 70% in the last 12 months (April 21-April 22) now is the time for farmers and contractors to look at what precision tools are in the market to help them make better decisions and use of the nitrogen they are applying to their crops.

To this end Yara NZ has appointed Drummond & Etheridge as the New Zealand distributor for the Yara N Sensors.

“It’s a proud moment to offer another layer of precision ag, and we’re excited to partner with Yara NZ to bring the N Sensor to NZ,” says Paul Galletly, research and development manager for Drummond & Etheridge.

Last spring Yara NZ imported two reconditioned ALS-1 units from the UK and fitted them to tractors on Taggart Farms in North Canterbury and Adar Farming in South Canterbury. Both operators Roscoe Taggart and Andrew Darling were very satisfied with the amount of nitrogen saved, and resultant crops were more even and easier to harvest in a very trying season without compromising yields.

This is what Roscoe and Andrew had to say about using the ALS-1 last season:

“The Yara ALS-1 N Sensor has been our best on-farm nutrient management tool to date. It has proven to be a 100% return on investment in its first season, providing environmental and economic benefits while maintaining and potentially increasing productivity. “

“The Yara ALS-1 N Sensor has fitted seamlessly into our arable operation, using it across all crop types, in real time and not waiting on satellite imagery which is often affected by cloud cover. We have significantly reduced our nitrogen spend and have more even crops with less lodging and easier harvest.”

The Yara N-Sensor ALS-2 offers farmers a solution to real-time variable rate nitrogen applications by adjusting rates according to crop growth whilst travelling across a field.

As a result, it delivers precise levels of nitrogen input according to the crop’s requirements, helping to both reduce environmental effects and maximisie potential profit.

A dedicated group of scientists at Yara’s R&D base at Hanninghof, Germany carry out trial work annually to improve calibrations that exist currently and increase the range of options for use.

As such the N-Sensor truly is backed by science and results in improved gross margins and greater nitrogen efficiency.

The Yara N-Sensor ALS-2 is the culmination of well over 20 years of development work by Yara R&D.

Originating from the first-generation Passive N-Sensor in 2005, the Active Light Source (ALS) was introduced as a solution to restricted working hours due to low or no ambient light. As the name suggests the ALS contains its own light source to continue operating irrespective of ambient light conditions.

In 2018 the ALS-2 was launched. During research and development, Yara had recognised the issue of damp leaves (dew) that affects all sensors and the reflectance accuracy achieved. Research was targeted to overcome this issue, culminating in the requirement to capture extra waveband data during sensing.

This ‘dew suppression’ is unique amongst sensors and is a feature in the ALS-2 N Sensor.

How does the N-Sensor Work?

The N-Sensor determines the nitrogen demand by measuring the crop’s light reflectance covering a total area of approximately 50m2 / sec.

Measurements are taken every second with the system designed to operate at normal working speeds and all bout widths.

Most sensing technology applied to agriculture is based on the typical light reflectance curve for vegetation (NDVI).

It calculates the actual N-uptake of the crop. Optimum application rates are derived from the N-uptake data and sent to the controller of the variable rate spreader or sprayer, which will adjust fertiliser rates accordingly. The whole process of determining the crop’s nitrogen requirement and application of the correct fertiliser rate happens instantaneously, with no time delay. This enables ‘real-time agronomy and application’ to be possible.

The single biggest benefit from using the N-Sensor is also the hardest to measure.

However Yara have conducted a large number of trials over the years looking at the yields of uniform compared to variably applied nitrogen in the UK and throughout Europe.

The average yield increase compared to uniform application was 3.2% with a maximum of 12% on some trials.

Analysis has shown that where fields contain higher levels of variability due to changing soil types, manure application or topography, the benefit obtained from variable N application using the N Sensor was its greatest.

One of the most common benefits seen by customers is the reduction in lodging from using the N-Sensor.

Over application of N can result in crop lodging, which can have dramatic effects on profitability through reduced yield, quality and increased harvest time and drying costs. Lodging in OSR in particular, as a result of too dense a canopy, can have a severe impact on yield with losses of up to 30% possible.

In trials between 2002 – 2004 improvements in combine output showed output increase of 10% to 26% across the trials with an average of 18.5%, reducing the number of harvest days required.

By applying the crop’s optimum N requirement in all areas of the field, the N-Sensor has the effect of helping to reduce variability in yield and grain quality. A trial carried in 2002 looking into the application of late nitrogen in winter wheat showed that the variability in protein was reduced by over 60% were the N-Sensor was used, compared to uniform.

If you are wanting more information on N Sensors and what they can do for you on your property visit www.dne.co.nz/yara, or phone Yara NZ on 06 877 6600 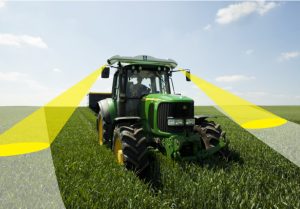